What is supplied by the supplemental HF measurement?

The VLF measurement gives us the basic paramteres of the upper D ionospheric layer. Within the digisonde measurement, we can get the similar diagnostics for the E and F region, possibly the sporadic E layer. However, if some more informations about the phenomenon influencing the ionosphere are required, another measurement needs to be conducted. The high frequency measurement, in fact, has a quite broad range of use.
The appropriate machine used to the HF measurement is a magnetometer, a very small radio telescope. Our construction is similar to the ones which have earlier been used within the NASA Radio Jove Project, see http://radiojove.gsfc.nasa.gov/. Its scheme is given in Figure 1.
Figure 1 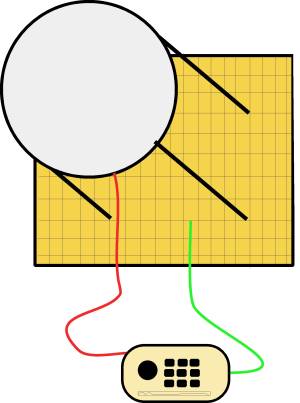 Originally, such a gadget was projected to measure the magnetic field's variations coming along the solar eruptions, some coronal mass ejections and the Jupiter magnetic storms. Such data provides us to analyze the spectra of fragmented and ionized molecules in the ionosphere and also some other physical parameters of the ionospheric plasma, such as the electron plasma frequency. For more data, have a look at the Github repository or the data storage.
However, we worked out the strong outbursts from deep space could have been measured as well. For example, we were able to detect a very young star located not far from the big nebula in Orion. On December 21, 2015, its strong radio outbursts were recognized. Have a look at this website.
The radio signal intensity level was drawn into a plot which is shown in Figure 2. It can be deduced that we can describe the dependency by an oscillation function while the relative amplitude of strong peaks is significantly differed from the basic state.
Figure 2 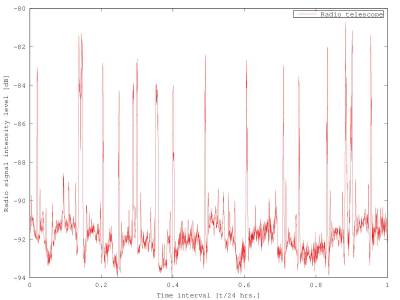 Using the approximation for a homogenous transmitter, which is invariant for t « 1, we are able to compute the energy currently as a X-ray burst. The appropriate model also provides the total amount of emitted photons. The energy exposed during the radio outburst is shown in Figure 3.
Figure 3 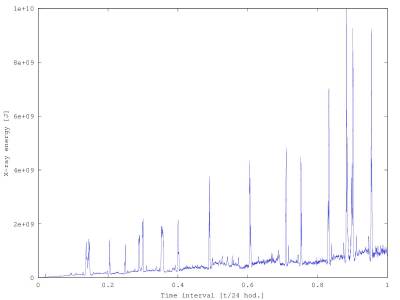 By the time the energy is known, it is possible to put together the system of differential equation describing the linear momentum and the angular momentum. With these parameters, we can compute the distance where the X-ray came from. In other words, we could have computed the distance between the Earth and the infant star.
The graph is given in Figure 4. We can see that the hypothetic distance growths rapidly with the time, but the single peaks corresponding to the outbursts approach each other well.
Figure 4 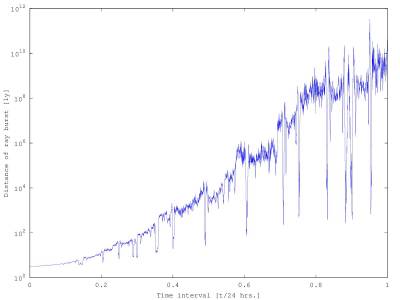 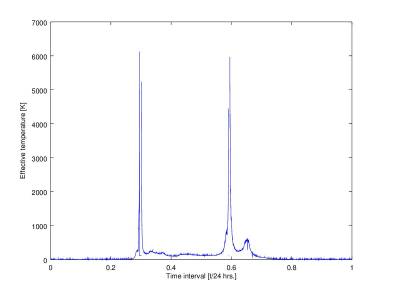 Applying the Wien's Displacement Law, it is possible to model the emission wavelengths and reconstruct the emission spectrum, which was drawn into a graph shown in Figure 6. We could say that all of the elements having the atomic number from 1 to 7 were included in measurable intensity. The spectrum and its profile matches to the young star well.
Figure 6 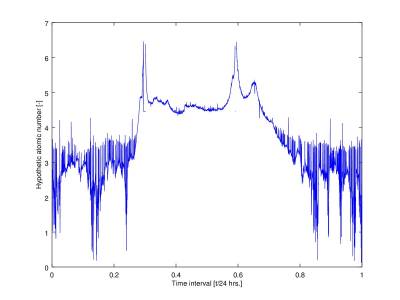 The data were prepared by Vojtěch Laitl and Jaroslav Maxa, The František Krejčí Observatory Karlovy Vary. All rights reserved.